The Difference Between Funiculars and Cable Cars 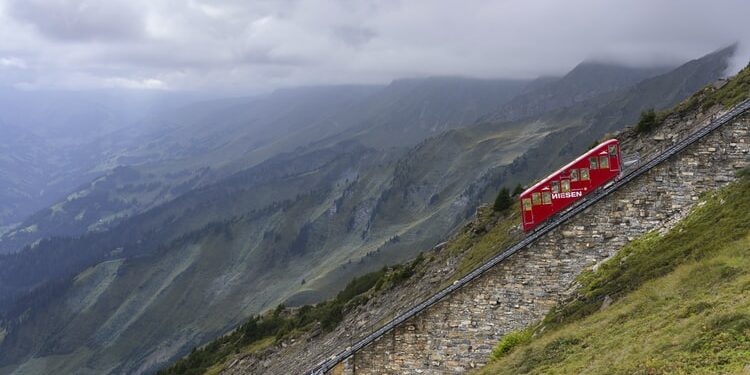 Wire rope has long been used for transportation, from the aerial ropeways hundreds of years ago to the airplanes of today, wire ropes are a key ingredient to these machines that move people and cargo from place to place. Gondola chair lifts are used for carrying skiers to the tops of mountains and sometimes back down again. Aerial tramways are made to carry people up steep mountains that are inaccessible by automobiles. Other forms of transportation that use wire rope cables to move cars along a track are cable cars and funiculars. Although these two forms of transportation are similar, they are not the same. But what is the difference between the two?

Cable Cars are more prevalent in the United States and funiculars are more popular in Europe. Cable cars are run by an enormous machine in the engine house. This machine turns moving the cables pulling the many various cable cars uphill and around the city. Funiculars, on the other hand, have two cars, pulled up and down a steep hill but they are on opposite cables, and as one goes up, the other one goes down.

Some of the first and oldest cable cars in this country are the Cable Cars of San Francisco. These cable car railways were the brainchild of Andrew Smith Hallidie who saw horses struggling to carry a car up a steep hill one rainy night in 1873, and they slipped and fell. He had been using wire rope to haul ore from mines and build suspension bridges in Northern California gold rush country and used that wire rope that he and his father had invented to pull cars up and down the fantastically steep hills of San Francisco.

No one believed it could be done, but Mr. Smith Hallidie devised a system with an endless wire rope that would be moved continuously by a huge, stationary engine. This wire rope was placed in a tube underground between two rails on which the cars traveled. The gripman or gripwoman controls the car by gripping onto the wire with a lever inside the car. As long as the grip holds the wire, the moving rope pulls the car along the tracks. Each car is built with three different types of brakes to ensure the car can stop when necessary.

Wire rope makes the world go round and makes the cable cars go up and down hills and around the cities. Wire rope is where the name funiculars came from. It is from the Latin word funiculus, which is the diminutive of funis which means “rope”.

Whereas a rope moves continuously for a cable car gripman to grab it and hold on while it zooms you around the city at a whopping 6 miles per hour, a funicular consists of 2 cars that are counterbalanced and permanently attached to the wire rope. They slowly go up and down one specific, particularly steep, hill.

The funicular transit system emerged in the second half of the 19th century. The counterbalancing of the cars was the cost-saving measure that made them so popular. Funiculaires de Lyon was the first funicular railway line, opening in 1862. These first funiculars used a  four-rail parallel-track design until the late 1870s when in 1879 Carl Roman Abt created a two-rail design with a switch to allow cars to pass each other. 3 and 2 frail designs saved money and space so the 4 rail design slowly faded into the background.

Inclined elevators are very similar to funiculars as they are built on a steep hill, however, inclined elevators’ cars operate independently; they do not operate in counterbalanced pairs, yet they still use wire rope to pull the cars up and down the hills.

Funiculars in the US and Around the World

About a third of the almost 60 funiculars in the US are in Pennsylvania. Most US funiculars are not in use anymore. Of the few that are still in operation, some are used for transportation, some for tourists, but all still rely on the wire rope that is turned on a pulley to get them up and down in203.clines so steep that they cannot be scaled any other way. There are hundreds of funiculars around the globe, most of which are found in Europe.

There are many outside of European countries as well. The terrain of the city of Valparaiso, Chile could only be scaled by funiculars so a plethora of them was built back in the late 1800s and early 1900s. Sadly, very few of those original lines are in use today.

No matter if you are using wire rope to move cable cars around the city or funiculars up and down a steep hill, or you need the strength and versatility of wire rope for some other job, contact us at Silver State Wire Rope, we can help you find the right wire rope and rigging for your needs!

Aerial Ropeways as a Mode of Transportation
April 8, 2020