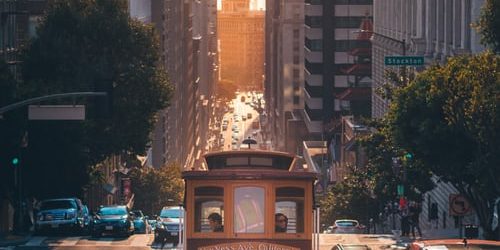 Birth of the Cable Car

In 1869, Smith Hallidie invented a steam engine powered, cable-driven, railway after seeing horses struggle to pull a horsecar up a cobblestone street in the rain. This was no ordinary street these poor horses struggled against, this was Jackson Street in San Francisco. This sparked the beginning of the original cable car company, Clay Street Hill Railroad. It was followed by seven more railroads, all working on 53 miles of track stretching up and down those extremely steep, infamous hills of San Francisco.

How do Cable Cars work?

Cable Cars have no engine or motor on them so how do they move? Where are the cables? It’s a secret! Andrew Smith Hallidie used a stationary steam-powered engine to push and pull all the cable cars up and down those magnificent hills. Now, however, there are powerful electric motors. The cable runs underground, in the “slots” you see in the road, to and from the giant winding wheels in the powerhouse. This powerhouse now houses the Cable Car Museum as well.

Who Operates the Cable Cars?

The gripmen or gripwomen, pull on the lever inside the car to “grip” the cable below and guide the cars where they want them to go. The car’s top speed is only 9.5 miles per hour unless they “freewheel” without gripping the cable. The cars all have three kinds of brakes: wheel brakes, track brakes, and emergency brakes. The California Line has grips and brakes on each side so the gripman and the conductor simply switch places when they hit the end of the line. The other lines use a turntable to turn the Cable Car around to begin another run.

Who Saved the Cable Cars?

In 1888 the electric streetcar had overcome the Cable Car as the favorite transit method. It was faster, cost half the amount to maintain, and could reach more areas than the Cable Cars. The Cable Cars, however, were still a popular mode of transportation… until the Great Earthquake of 1906. As the Cable Cars could climb the hills better than the streetcars, some of the lines were rebuilt.

In 1947, because the buses were so much more cost-effective, Mayor Lapham decided that the cable cars had to go. Upon hearing this, Freidel Klussmann founded the Citizens’ Committee to Save the Cable Cars. They began a campaign to show the value of the Cable Cars and were able to get an amendment on the ballot that year. Everyone soon realized people go to San Francisco to ride Cable Cars, not busses, so the amendment passed by a landslide!

Since then, the Cable Cars have become a San Francisco icon. They carry 7 million passengers per year, most of them tourists. They are a top attraction in San Francisco, right up there with the Golden Gate Bridge and Alcatraz Island.

Next time you find yourself in San Francisco, California take a ride on the famous Cable Cars, now that you know their secret! Thanks to wire rope, patented by Andrew Smith Hallidie and his father and the poor horses struggling in the rain, it is the last manually operated cable car system in the world, spanning across three centuries!

The wire rope Andrew Smith Hallidie and his father patented those many, many years ago is still used today for a variety of things, from suspension bridges to construction to making actors fly on stage. If you need wire rope for your own transportation, construction, or anything else, call Silver State Wire Rope in Las Vegas today!

10 Best States for the Construction Industry in the US
October 3, 2019

Important Facts about Women in the Construction Industry
July 19, 2019